In Japan, where for two years I had the privilege of living and working in the capital of the island of Hokkaido, I learned one thing very quickly: One of the most important rules of communications, also useful when working with others, is always letting the other party save face. 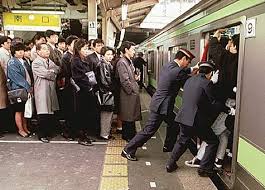 130 million people live in Japan, sometimes in the smallest of areas. The pictures of white-gloved gentlemen pushing people into Tokyo subways during rush hour trigger alienation and amazement at the same time in us. This living together in small areas is possible only through polite communication and the solving of differences of opinion in a way that the parties are able to speak to each other and keep their relationship intact later on. This is founded on the attitude of constantly asking oneself: What impact do my actions have on the whole? How can I represent and further my interests while staying elegant and diplomatic? So that the other party can save face? Similar to diplomacy, the Japanese have a pronounced feeling for nonverbal communication and communication “between the lines”. Even without the use of the word “no” there are elegant possibilities of letting the other party know, that one is not of the same opinion or has a different solution to a problem in mind.

This approach requires a basic benevolence and the suppression of the urge to tell the other party exactly what one is thinking. Sometimes one would like to do so in order to vent one’s anger or because one feels that a “cleansing storm” would benefit the relationship.

But in Japan an important point in togetherness and in the communication with others is never to be offensively loud or in any other way compromising during a conversation. This would put the other party in an embarrassing situation, making them “lose face”. For this reason, one should always stay calm and rather pause for a moment than get involved in a dispute. If a Japanese has lost face, the otherwise tactful Japanese, also anxious for harmony, will go wild.

These principles can also be found in diplomacy. There, however, it is not about communication in a very populated country, but rather about the management of complex international relations around the world and the furthering of concrete interests. This complexity of relations can be transferred onto global corporations that, in a complex international environment, must communicate and negotiate wisely in the long run, not only with their clients and suppliers from different cultures, but also their employees, which are scattered all over the world.

We use cookies to ensure that we give you the best experience on our website. If you continue to use this site we will assume that you are happy with it.OkRead more